KIPLING’S POEM WE AND THEY IN ANALIZING THE INHERITANCE OF LOSS FROM POSTCOLONIAL PERSPECTIVE - NDL institute
Tulisan Terkini
Loading... 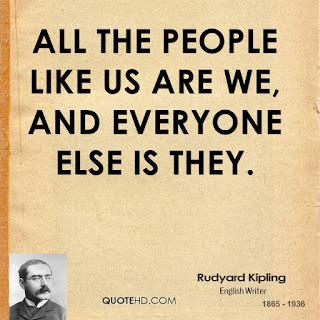 Postcolonial criticism is the way to analyze literary work using colonialism perspective. Colonialism is an ideology that beliefs one population can control another population. This critic based on the how colonialism influence entire way of life the population has already colonized. As Tyson (2006:418) argues “as a theoretical framework, and this is our primary concern here, postcolonial criticism seeks to understand the operations—politically, socially, culturally, and psychologically—of colonialist and anticolonialist ideologies”.
The Inheritance of Loss by Kiran Desai told about story basis in India, as a former colonized country of English. One of  point of view using postcolonial criticism is othering, the colonizers’ treatment of members of the indigenous culture as less than fully human. According to Tyson (2006:419) “the colonizers saw themselves at the center of the world; the colonized were at the margins”. In applying this critic, well be applied a poem by Rudyard Kipling entitle We and They as the basis of othering, how to distinguish colonizer and colonized people in Kiran Desai’s work The Inheritance of Loss.
Poem We and They (1926) depicts brief distinction between colonizer and colonized people. It can be seen from this work created by Kipling as his sentiments about the British Empire and imperialism (empire-building) (Asnes & Down:2009). In this poem We depicts colonizer people in this case, British people, while They depicts colonized people. Whole stanza in this poem contrast British culture and other culture.
The Inheritance of Loss is set partly in Indian city Kalimpong of West Bengal and partly in the USA in New York with some flashbacks from England. As colonized country of British, India in many aspects influenced by British culture, including how Indian people act in their daily life and those are depicted in the characters in the story. The novel shows how colonialism affects cultures and societies through generations and that’s why the characters of this novel are in a state of constant psychological turmoil searching for an identity torn between two cultures, of which one seems to be superior to the other Euro-centrically (Anwar).
Related to We and They, this analysis will be focused on existing class in the story partly in Kalimpong and USA. It can be seen the relation among the characters in each scene of this story. First is the relation between Sai’s family and their cook which is Sai’s family as upper class and the cook is lower than them. The cook, as lower class, refrains from talking much to his benefactors except for taking orders, of course. As stated in the following stanza from We and They Poem.
Father and Mother, and Me,
Sister and Auntie say
All the people like us are We,
And every one else is They.
And They live over the sea,
While We live over the way,
But-would you believe it? – They look upon We
As only a sort of They!

In line 1-4 briefly depicted how upper class point of view toward other class as depicted also in Sai’s family who placed the cook in lower class than them and has limit right to do except what upper class order, even in talking in their house.
Next lines can be applied in the story are:
We eat pork and beef
With cow-horn-handled knives.
They who gobble Their rice off a leaf,
In the convent, Sai learned that “cake was better than laddoos, fork spoon knife better than hands. According to upper class (We) supposed that their food and how they eat using fork and knife are better than what lower class (They) eat and the way they eat. From the story also known that in line with what meant by the line above is that Jhemubhai Patel does not like Indian ways and traditions despite living in India. He eats chapati’s with knife and forks. In postcolonial criticism it is called Euro centrism, the colonized people try to act like European as their colonialist.
The last stanza of Kipling’s poem can be applied in analyzing how Biju’s effort to get better life by moving to America for getting job. Here is the last stanza of Kipling’s:
All good people agree,
And all good people say,
All nice people, like Us, are We
And every one else is They:
But if you cross over the sea,
Instead of over the way,
You may end by (think of it!) looking on We
As only a sort of They!

The stanza above in line with how American people suppose to Worker who came from The Third World. America and England are First World countries who will always look down upon Third World, which was previously colonized for being uncivilized and barbaric and remains an “Orient” for the white man. Biju displays the despair of all the immigrants, who live a diasporic life away from their homeland, who live as second class citizens abroad and are agonized by a state psychological exile. he gets humiliating treatment from the white Americans who call him “a brown curry-smelling reptile”
Applying We and They in Desai’s novel from postcolonial perspective briefly depicted about how othering, Euro centrism, influenced how Indian’s (colonized people) daily life. It can be seen from food and the way they eat and distinguish themselves from lower class. Other stanza also depicted how upper class supposed themselves better than other as Biju’s experience when trying to reach Visa in American Embassy and when He was in America. All of those othering can be concluded that Colonizer Country always look down to Third World that they colonized before.