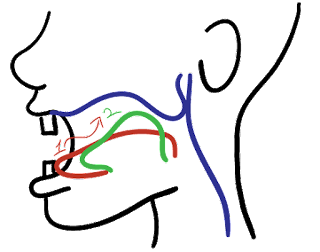 Abstract
This research is aimed to analyze the pronunciation errors of plural form, that is –s sound in English produced by KEMENAG Class students. The data collected from recording presentations and discussions are involved within it. This research focused on how the subject produce the allomorph of –s sound in plural form, those are [z], [s], and [əz] sound. The findings are divided into three parts of word lists; those are words with final voiced non-sibilant segment, voiceless non-sibilant and sibilant segment.  The result shows that one hundred percents of [s] sounds are pronounced properly, five percents of [z] sounds are pronounced properly and ninety five percents are error, while one hundred percents of [əz] sounds are error.

Key word: pronunciation error, plural sound –s
1.    Introduction
English is a foreign language for Indonesian people because there are two languages are used before it. Those languages are local language and Bahasa Indonesia. As a foreign language, English is difficult for Indonesian people who learn it. The learners’ difficulty in pronouncing makes phonological errors or mispronunciations occur when English is used. While, pronunciation is important in communication in order to make understand between speaker and hearer. That is same with Mathew (1997, p. 8) argues that “pronunciation will be a vital key to enabling students to communicate in the English, in the move towards communicative goals.” In phonological errors the sounds were produced not proper with the native sound of English should be. It is because there are many different sounds in English that change based on the word and its change syntactically or phonologically.
To know to what extent English learner pronounce sound of English many researches about phonological errors are conducted. One of them is conducted by Nani Indrajani Tiono and Arlene Maria Yostanto, students of English Department, Faculty of Letters, Petra Christian University. They studied about  English  phonological  errors  produced  by  English  department students,  particularly  English  consonantal  sounds  that  do not exist in Indonesian phonetics system – [v], [θ], [ð], [ʒ], [dʒ], and [t∫] – and the patterns  of  those  errors (Tiono & Yostanto, 2008). The result shows that the students produced thirty-four kinds of phonological errors and that the deviations occurred most frequently before, after, or in between vowels.
The finding of the study reviewed above is errors in English consonantal sounds. It was in specific consonant, which are the consonants that do not exist in Indonesian phonetic system. In this paper, the researcher wants to know phonological errors of morpheme of suffix –s in plural form of English. Morpheme –s in plural form has different pronunciation based on the singular word followed it. This present study would investigate how it is pronounced by KEMENAG Class students of The State University of Surabaya.

In phonetic symbol can be written as below:

Difference sound of –s sound or allomorph of -s are matter of how final sound of the word it followed. As stated in Carstairs-McCarthy (2002, p. 22) “three allomorphs are distributed in an entirely regular fashion, based on the sound immediately preceding the suffix.” Above has already mentioned there are three kinds of final sound are followed by plural –s sound. The first is voiced non-sibilant segment, that produced by passing air through the glottis and cause vibration and without hissing sound. The second is voiceless non-sibilant segment. When produced this sound the air flows freely through the glottis into the oral cavity and without hissing sound. The last is sibilant segment, that is produced by the air is not blocked at any point and there is no plosion. Then sibilant sounds are sound with clear hissing noise (Hamann & Schmitz, 2005, p. 11).

2.1
2.2
3.    Method
The present study is qualitative research which is conducted to find out the errors in pronunciation of plural form (suffix –s). The subject is The Students of PPs UNESA KEMENAG Class 2015. Data is gotten from recording of Class Presentation by Students and limited by taking three recording video presentation. Those are involved three presenters and participants in discussion session. The researcher will collect the utterances of plural form and will be analyzed whether it is proper pronunciation or not based on the phonetic rules of English. Then, the finding will be presented in list of plural form and the result of data analysis.

In the table above can be seen there are eight words are found in collecting data from the recording. Those words have final sibilant segment that must be followed by [əz] in plural form. The suffix –s must be pronounced as [əz] sound based on the phonological rule. But in the table above can be seen all of the plural forms are pronounced by [s] sound. It means that the subjects tent too make errors in pronouncing [əz] sound in plural form.