Home Pendidikan INTEGRATING CONTENT-BASED AND TASK BASED APPROACHES FOR TEACHING, LEARNING AND RESEARCH

INTEGRATING CONTENT-BASED AND TASK BASED APPROACHES FOR TEACHING, LEARNING AND RESEARCH

Agus Khairi    10:22:00 AM    Pendidikan
INTEGRATING CONTENT-BASED AND TASK BASED APPROACHES FOR TEACHING, LEARNING, AND RESEARCH 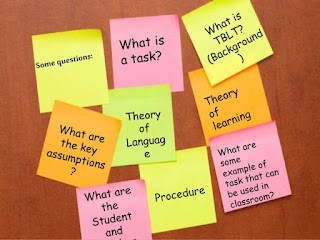 In giving input to the learners, teacher should consider to their input, whether positive or negative evidence. It is important because it influence to the process of learning. Especially in children or young learner, input should be given in grammatical form, not only vocabulary input. In other word, positive evidence are needed for young learner to develop their language because children tend to use grammatical input in language. In line with Finley (2012, p. 61) states that “in typical language development, children  tend  to  use  only  positive  evidence  to  learn  language.” Children learn language without comparing grammatical and ungrammatical rule, thus positive evidence is very important to the young learner in language teaching and learning process.
In providing negative evidence to the learner, teacher, classmates, and interlocutor can use request and recast. Request is used by reformulating what learners said before in order to get correct meaning. While, recast used by interlocutors by restating what possible meaning that they think what the leaner means. The following provides examples both Request and Recast.
Reformulation;
Learner: My grass broken
Interlocutor: Your glasses? Are your glasses broken?
(Request with Reformulation, serving as a Prompt)
Learner: Yes, glasses
(Response)
Recast;
Learner: My grass broken
Interlocutor: Your glasses are broken.
(Recast)
(Cook, 2009, p. 80)

4.         Tasks as Instruments For Teaching, Learning and Research
Task has important role in teaching and learning process. Through the task teacher engages students to understand the target language easily and experience the authentic situation, especially for EFL Classroom. Task can be form in exercise and activities in the classroom and out classroom. According to Pica (2005, p. 341) “there are many types of tasks and many activities and exercises that are referred to as tasks.” Every activity that can engage students to understand the target language can be used as task for the learners in order the aim that stated in curriculum can be achieved.
There are three procedures in applying the task in the classroom. As explained by  J.  Willis  (1996)  and  Willis  and  Willis  (1987)  in Cook (2009, p. 82):
“the first phase consists of topic-oriented, input-rich pre-task activities, during which small  groups of students get ready for their main task, with teacher support. This is followed by a planning phase in which the groups carry out the task as well as draft and practice a report on their task work. In the third phase, the learners share their report with their classmates.”
Those are the phase in giving task to the learner in teaching and learning process in the classroom.
In research that focus on language teaching and learning, task is used as instrument to get data that will be analyzed in research process. When conducting research, task is used for both research and teaching in the classroom. Pica stated in Cook (2009, p. 82) that “tasks have had great and growing appeal to researchers as well.” Furthermore, Pica added that “task that used can be made by the researcher, teacher’s made, adapted from students’ textbook, scholarly publications, and professional references.”
As noted before that task very useful to engage students to understand target language feature as the aim of language teaching. But still, the task should considered as aid to the students and must be combine with appropriate content for the learner. As cited in Cook (2009, p. 84)
“Tasks designed to help learners prepare to meet the challenges of form and content  competence  should  be  based  on  content  that  contains  those  linguistic  features over which the learner already has some control, but needs to improve and has yet to master (Doughty and Williams, 1998; Lightbown, 1998). Such readiness for improvement or mastery can be gauged in two principal ways: by referring to developmental stage information, or by reviewing learner speech and writing and locating contexts of inconsistent form accuracy and suppliance.”

Content that related to the linguistic feature of target language can be deliver in some activities as task like jigsaw, Spot the Difference, and Grammar Communication.
5.         Designing Language-Focused Tasks For The Content-Based Classroom
In order to achieve the goal of the language teaching and learning, task and content must be design as good as possible as integrating approach. Tasks have to be designed to help students easier and enjoy to learn and have to be supported by appropriate content. Designing and implementing the task focused on content-based can be done collaboratively by researcher and teacher. Then, this task is used to treat the students learning. But, the most important thing should be considered in making and designing the task is the consistent with the instructional curriculum and not intrusive to the  schedule  and  format  that students had come to expect (Cook, 2009, p. 85).
Moreover, content task should be authentic in order give students real experience based on the target language. This is aimed to enhance the task designed and make the task long-term use for teaching and research. In addition, tasks have to be integrated into curriculum text, topic, and assignment. Those are aimed to make the task focused on content based can be applied as well as possible in language teaching and learning, furthermore for research in education.
6.         Focused Tasks: Design and Implementation for Teaching, Learning and  Research
Focused task design as a research has been conducted by adapting two courses that integrated content and language to help intermediate and advanced English language learners with their development and production of English articles, verb endings and modal forms. The latter research conducted by Pica in 2006 by giving passage in form of fill in the blank with the article the, a, and zero articles in plot summaries of film. There are three design task are used in the research, those are Spot the Difference, Jigsaw and Grammar Communication. In doing the task students are asked to work together by doing the grammar task given.
Spot the Difference task, for example, pairs of learners read and discussed the same original passage, and then each learner was given a version of the passage, with slight modifications to the articles or verbs in its sentences. The following task is the example of the task given to the students;
Other types of grammar focused tasks in this collection asked the learners to reorder sentences to match those of an original passage, (for Jigsaw), or fill in blanks to make the sentences complete (for Grammar Communication). All three types of tasks were effective in drawing the learners’ attention to the targeted forms and retaining them during text reconstruction over the short duration of the studies.
In a subsequent three-week study, Pica et al. (2007) compared the impact on SLA of three types of focused tasks, used in another content-based language course on contemporary American culture. The purpose of the study was to see if learners could  improve  their  ability  to  notice,  produce  or  build  knowledge  of  English articles as an outcome of their task participation over a three-week period. Through out  the  course,  intermediate-level  learners  read,  discussed  and  debated  the content of articles and essays on American culture from authentic newspapers, magazines and books.
The knowledge test was a passage level variation of a grammaticality judgement test in which the learners were asked to read versions of passages from their course textbook in which some of the sentences had been altered to include incorrect usage of articles. Findings revealed that the learners in each pair made weekly progress, but the Implicit and Explicit learners outperformed the Incidental and Control learners, particularly  on  noticing  and  knowledge.  The  Explicit  and  Incidental  learners appeared to be slightly better than the others on production. These findings were considered very tentative and limited in generalizability, due to the small number of learners in each task treatment and the brevity of treatment time (Cook, 2009)
C.      CONCLUSION
Language teaching, learning, and research nowadays focus on learner-centered in the activity. There are two approaches are familiar applied by teacher in classroom activity and researcher in conducting research, those are content-based approach and task-based approach. In content-based approach, language is medium that used by learners to discuss the authentic content given by the teacher in classroom activities. While in task-based approach, tasks are designed like real life happen in target language to involve the students in activity. So, the students get real experience from the activity provide by the teacher.
Some studies recently use integrating content based and task-based approach to conduct research in EFL studies. The researcher and teachers design and implement the task collaboratively by considering some aspects like long-term usage, appropriateness with curriculum etc. then, the finding reveals that there are progresses in each activity done by the learners. So, it can be concluded that integrating content-based and task-based approach in teaching, learning and research can improve students’ acquisition of target language.