SLAVERY AND FREEDOM IN TOMI MORRISON’S BELOVED: A MARXIST CRITICS 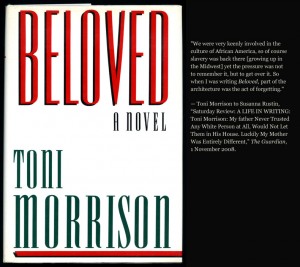 Abstract: This paper is aimed to reveal the slavery and freedom in Beloved write by Tomi Morrison by applying Marxist Criticism. The analysis set up from the basic view of slavery happen in human development in the world. Beloved story tells about slavery in the nineteenth century known as precapitalist society in America South. Based on the Marxist perspective there are three concerning that indicates slavery in this story, those are inequality, commodification and alienation. And the last, from the analysis found that the continually oppression can raise the slaves’ consciousness up to get freedom from their slave-owner.

I.         INTRODUCTION
General history of human development in the world is not out of slavery phase even though it can be different in each place and community. This is in line with Engerman (2003, p. 187) argues that “slavery has taken many different forms; it has been among the most frequent of human institutions, existing in almost all societies in the past and in most parts of the world.” Slavery is a system in a society where a human or group of human as a master of the others, then called slave. Master can do anything to the slave because slave as his/her mine and can be sold to the other master. Generally, slave as worker who is under command of the master and asked to do all of the master works.
According to Marxist perspective there are four epochs of human development in the word, namely primitive communism, ancient society, feudal society, and capitalist society (Livesey). Generally in those epochs, slavery happen in ancient society. Nevertheless, historically slavery can be found in modern era when people have economic income and power. People who have more economic income enslave others who do not have economic income to fulfill their need in daily life. Even though the relationship between those people are worker and work giver but still oppression happen in their relationship.
Moreover, Marxism view the oppression in society based on socioeconomic that make stratification into class in society. This perspective consistently hold by Marxist in viewing social stratification from primitive communism till capitalist society. In capitalist society, according to Marxism, people are divided into “haves” class and “have-nots” class, bourgeois and proletariat. Socioeconomic class not only view stratification from economic power but also political power (Tyson, 2006, p. 54).
Based on the perspective of class stratification base on socioeconomic in capitalist society, Marxism critics in literature focus on class stratification and oppression among them. Marxism reveal the oppression upper class toward lower class in capitalist society within the text. According to Marxists, even literature itself is a social institution and has a specific ideological function, based on the background and ideology of the author. Furthermore, Marxist look for oppression of a lower class by an upper class. They examine how people are made into commodities to make money off of. They examine the economics featured in the text. Marxist also examine what social classes are featured in the text.
In Marxist perspective, what author thought and wrote in his/her work are reflection from objectives in their environment, as Pereverzev (2014, p. 56) “state that A literary  scholar's  task consists in discovering the objective reality in a work of literature which provided the material  for it and determined its structure.” Furthermore, Terry Eagleton as cited in Castle (2007, p. 108) insists that “The literary text is not the ‘expression’ of ideology, nor is ideology the ‘expression’ of social class.”  It means that the critic reveals the objective of capitalism as a reality that happens in society as economic development and divide people base on economic power.

II.      DISCUSSION
Beloved tell about slavery in America South in nineteenth century, this era indicates precapitalist era where slavery exist at that time. Even though, Marxism is appropriate with capitalist economic system but it can be useful here because capitalism and slavery intimately related as historical phenomenon. In applying Marxist critics in Beloved, firstly, will be discussed the characters divisions based on Marxist perspective, namely upper class (masters) and lower class (slaves). Social stratification in Beloved can be seen below:
Upper Class (Bourgeois, Slave-owner)
This class consists of characters who enslave the lower class; those are Mr. and Mrs. Garner, Schoolteacher

Lower Class (Slaves)
This class consists of characters who become slave; those are Paul D., Paul A, Sethe, Denver, Baby Suggs, and Sixo
After identifying the characters based on the social stratification, it will be discussed more about text in Beloved base on Marxist perspectives about relation of the characters in order the slavery can be revealed clearly in this Novel. In analyzing the novel, Marxist perspective will be the main referring that used as basic to view the point that indicates slavery in the story.
It is clear that in the novel depicted inequality among the characters. This inequality is structured by race, that is American and African. Even though, Marxism do not divide human based on the race but in this case, the fact, the African at that time is lack of economic power, means that the African was poor. This economic circumstance, make him need to work to the farm owners. In this relation, the farm owner is superior than the worker, so the worker becomes the inferior. It can be seen that the position of farm owner, then become slave owner, is structured by having farm as capital rather than race. This is in line with Marxist perspective about a fundamental division between two social group; namely one group who have control to food production and other fundamental resources that needed by the society. Then, the other group is a group who has not owned or controlled the production (Livesey). By having the resources of production may make inequality in the society so that appear superiority and inferiority.
Enslavement by Garners in this story is suggested by economic motive, that is benefit that will be gotten if the use slaves’ to do the work in their farm. By using the slaves they can ask them to work without pay attention to the fee because they are slave owners who have right to the slaves. This is kind of way to make surplus in production by minimizing the cost of production by employing the slaves they have. This is what Marxist critics to the capitalist society that they tend to accumulate the capital by minimizing the cost production; one of the ways is that low price of worker or labor. In the precapitalist society, feudal to capitalist, having slaves is part of minimizing the cost of production. It can be concluded that it is clearly depicted the slavery caused by economic motive, not racial motive.
Marxism also critics about commodification of objects and labor in capitalist society. Commodification in this era is difference with precapitalist era in commodifying person or labor. Recent capitalist  ore focus on exchange value or sign exchange value, as stated in (Tyson, 2006) “Commodification is the act of relating to objects or persons in terms of their exchange value or sign‑exchange value.” Otherwise in precapitalist era, commodification involve person or human being as object as commodity. Slave-owners may sell their slaves to the others by certain number of money and can be used to fund their farm development. This happen in Beloved and can be seen when slave owner make bargain each other in number of money.
The commodification make the slaves feel alien in their lives. Of course it influences their relationship among the society they involved. They limit their relationship each other, even their family because the alienation caused by commodification. They afraid when attached someone in their live, the person will be taken away from them because the slave owner sell them to the others that may be in different places. Clearly can be seen, slavery, that permit slaves are sold to the others cause the alienation in Beloved story. The characters not freely attached themselves with the other because afraid of lost. That is why personal relationship among the slaves broke up ant they tend to selfish. This alienation is stated by Karl Marx that is happen in capitalist society as stated in (Tyson, 2006, p. 61) that the labor dissociated from their own labor as well and on the society as a whole. Similar with what happen beloved where the slaves and former slaves become alienated from the society and live far away from the community. Like Sethe and her family that alienated from their community of slave-owners and they live in Cincinnati.
Moreover the alienation of slave from each other is used by slave-owner to make slaves live partially and can avoid their unity. The unity of slaves or worker worry the owner because can be threat for their superiority. Slave-owners tend to alienate the slaves in order divide and conquer strategy they used continually happen. But, what slave-owners afraid of finally happen among the slaves. Communal bonding among the slaves rises up and planned to escape from Sweet Home Farm. No matter what slave-owners do to make relation between the slaves is broken but it surely will rise in a certain time. This is what Marxist believe that someday lower class will get unity and make movement to free up themselves and become ruling class. In Beloved story, the effort of slaves to get freedom depict in scene Denver rise up his brave to leave the house and ask for help.

III.   CONCLUSION
Slavery happen in human development in the world base on economic and socioeconomic. Slaves are considered as lower class and slave-owner who has economic power as upper class. This happen in Beloved writes by Morrison where take place is America South and tell based on the situation in nineteenth century, known as precapitalist era. Marxist perspectives view the slavery of the story by reveal three points, namely inequality by enslavement, commodification and alienation. Otherwise, freedom is viewed by analyzing the effort of the character to escape from the farm to free themselves up.
REFFERENCE
Castle, G. (2007). The Blackwell Guide to Literary Theory. USA: Blackwell Publishing Ltd.
Engerman, S. (2003). SLAVERY, FREEDOM, AND SEN. Feminist Economics, 9(2-3), 27. doi:10.1080/1354570032000078033
Livesey, C. Social Inequality.   Retrieved from www.sociology.org.uk
Pereverzev, V. F. (2014). Essential Premises in Marxist Literary Scholarship. Soviet Studies in Literature, 22(2-3), 10.