Home Literasi THE CHARACTERS OF MOMO

THE CHARACTERS OF MOMO 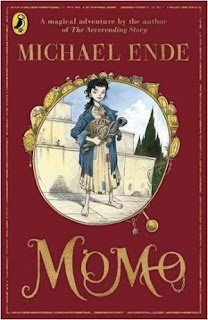 Three points of Character analysis:
a.        Character’s Action
From the story can be explained how the character Momo act, she is BRAVE child.
In the story, Momo depict as a brave child. It can be seen in her action when She keep trying to save the time from Men in Grey and adventure to the depths of her heart, where her own time flows from in the form of lovely hour lilies, to the lair of the Men in Grey themselves, where the time people believe they save is hoarded.
Furthermore, she has exactly one hour to defeat the Men in Grey in a frozen world where only they and she are still moving. She surreptitiously follows them to their underground lair and observes as they decimate their own number in order to stretch their supply of time as far as possible.

b.        Character’s Speech
Character speech of Momo can be seen through her talk when she makes dialogue or involved in dialogue with someone. For instance:
"So," said one of the men, "you like it here, do you ?"
Momo nodded.
"And you want to stay here ?"
"Yes, very much."
"Won't you be missed, though ?"
"No."
"I mean, shouldn't you go home ?"
"This is my home," Momo said promptly.
"But where do you come from ?"
Momo gestured vaguely at some undefined spot in the far distance.

From the dialogue can be depicted that Momo is a child who does not talk much, she is not talkative child. She answered the question from interlocutor very short and as needed and rarely asking question. So, it can be concluded that Momo is an INTROVERT child.
c.         Character’s Thought
Thought of the character in the story can be seen from what the character think about the other or his/her environment. Author invites reader climb the character’s head to explain the character thoughts. It also depict by the author in the dialogue where the character is involved and reveal in the character’s action. In the story, the character Momo’s thoughts depict as a CARE and VISIONARY person.
It can be seen in her action to save the time from Men in Grey effort to keep the time they take from other people in Timesaving Bank for their community. She care about the others time because her vision that time is very important for people.
Her care also can be seen from the dialogue between her and Hora when she ask to invite her friend to see professor Hora and where the time come from. This dialogue can depict to us about her care,
"So where was I ?"
"In the depths of your own heart," said the professor, gently stroking her tousled hair.
"Professor Hora," she whispered again, "may I bring my friends to see you too ?"
"No," he said, "not yet. That isn't possible."
"How long can I stay with you, then ?"
"Until you feel it's time to rejoin your friends, my child."
"But may I tell them what the stars were saying ?"
"You may, but you won't be able to."
"Why not ?"
"Because, before you can, the words must take root inside you."
"But I want to tell them - all of them. I want to sing them what the voices sang. Then everything
would come right again, I think."
"If that's what you really want, Momo, you must learn to wait."
"I don't mind waiting."
"I mean, wait like a seed that must slumber in the earth before it can sprout. That's how long the
words will take to grow up inside you. Is that what you want ?"
"Yes," she whispered.
"Then sleep," said Professor Hora, gently passing his hand across her eyes. "Sleep !"
And Momo heaved a deep, contented sigh and fell asleep.
(Blow, 2011)